I'm new to this board. Nice to meet you all.

Been a fan of Kitagawa's work since 2003, but I dare say, I have only started to really follow her work this past year. I was hoping someone could point me in the right direction of where to find torrents of her earlier works. Namely the following:

I'd appreciate it greatly. I am really looking forward to "Hana no Ato." Being a japanese sword student, I look forward to seeing her in action.

Again, nice to meet you all.
Top

Her new tanpatsu drama, Hitsudan Hostess, will air on 1/10! The official site is up along with a trailer.

I hope somebody subs this!

Since this is a movie I do not thing you can put Hostess with a pen here, but I would still like to get it subbed and put it up on avistaz. Just depends on when/if the RAW is available.
Top

SouthsideIrish wrote:Since this is a movie I do not thing you can put Hostess with a pen here, but I would still like to get it subbed and put it up on avistaz. Just depends on when/if the RAW is available.

It's not a movie, it's a new year's special. Tanpatsu dramas have been put on DA before like Maison Ikkoku.
Top

Then Tango has offered to translate this for me so this may not get done quickly, but Dramaniac, or at least me and Tango will do it.
Top

Watching Hitsudan Hostess and Keiko is so kawaii in it!
Top

i just watched one of her earlier movie - Dear Friends. that's the 2nd time i see her after Buzzer Beat.. really kinda shock.. and wat a contrast!
Top

Her role in Buzzer Beat was so amazing! I really am looking forward to her future roles. She's such an amazing actress and I love her beautiful hair and face!! Her and Yamapi were such a cute couple!
Top

where did you watch it?
Top

KeyHole TV most likely. I slept too late so I managed to watch the later half only.
Top

any news on the subs for Hitsudan Hostess??
Top

I liked Kitagawa Keiko so much.. she's so cute and adorable...
her play in Buzzer beat amazed me..

I hope she will have a drama in Spring or Summer!

I wanna watch Keiko-chan's Hana no Ato / After The Flowers movie!

is Hana no Ato available in torrents section?
I want to watch it so much.. Keiko..... ^^
Top

Ooochaa wrote:is Hana no Ato available in torrents section?
I want to watch it so much.. Keiko..... ^^

It just came out in theaters in Japan. We'll probably have to wait several months for the DVD release.
Top 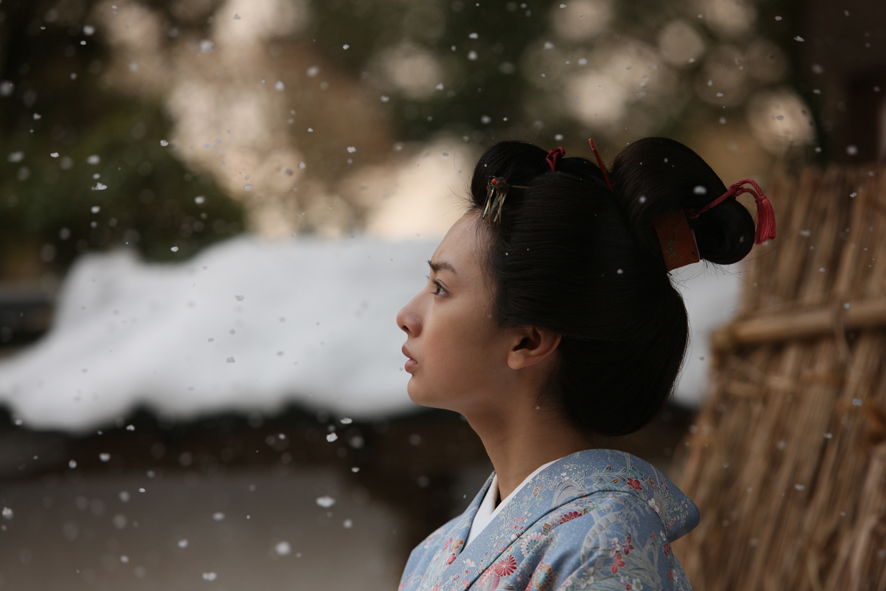 Ooochaa wrote:is Hana no Ato available in torrents section?
I want to watch it so much.. Keiko..... ^^

It just came out in theaters in Japan. We'll probably have to wait several months for the DVD release.

wow.. great.. I can't wait.. ^^
for now I will be waiting for Hitsudan Hostess English Sub..
Keiko hontoni daisuki.. ^^
Top

anyone has her variety shows videos ?
Top

mina-san... how about hitsudan hostess' subtitle? is it available already?
Top

Not yet. Our editor has some major unni assignments right now, so she hasn't finished with it yet. I am hoping it will be done by Sunday.

BTW we are a small group, basically one person to do each job, so if one person gets busy it tends to slow production. We tried to get another editor, but that isn't the easiest position to fill. Also, we only have one translator now, and there was a lot of dialect in it, and that made translation a lot harder.

Oh, and I will send out a tweet when the editor is done with it. Just check out the link in the signature.
Top

oh dear, I watched mizu ni sumu hana... it was... painful... and just when I thought it was over, nope, another half an hour.

I did like the ending song though. I'm downloading mop girl now
Top

btw, i had some different opinion with my friends yesterday regarding the movie Dear Friends. They insisted that Kitagawa Keiko nude scene is actually real T_T I remember reading from here her body was actually covered in plaster. sorry if this is slowpoke..
Top

can any1 tell me wht movie is this ???
just found this picture.. n im dying to know about this movie/series

k_erw86 wrote:can any1 tell me wht movie is this ???
just found this picture.. n im dying to know about this movie/series

It's a movie called Hana no Ato. Here's the movie's official site.
Top

Hey guys, new here.
I've been a fan of keiko since 2007, and i just found this thread. where have I been these 3 years?

It seems Matataki will be in Japanese theaters soon. I want to watch that over Hana no Ato. It's going to be a long long wait yet for the DVD.
Top

Again its another story of a undeniable beauty from Buzzer Beat, Kitagawa Keiko. On 19th, she made audience greetings in Tokyo at the release of her new movie, “Matataki“.

Keiko plays a girl who loses her boyfriend from a motorcycle accident, but also loses her memory, as she was riding with him when the accident happened.

At the greeting, Keiko said, “I learned how precious it is that I am alive now, and that I should cherish people around me after making this movie.”

*mato-kun – Keitagawa keiko admit that she is manly personality but how she ended up with Yamapi? lol thumbs up~!

anyone has the clips of her recent variety show appearances?
Top

I love her in buzzer beat with Yamapi. <3 <3 two thumbs up for her.

Don't worry, there will be a new drama next year: http://www.d-addicts.com/forum/viewtopic_90496.htm

my Keiko-chan is getting more popular these days! I'm so happy for her! I knew she would go this far!

Her new drama LADY is airing every Friday..

I watch all of keiko's movie

It's been awhile that I visited dear Keiko-chan's thread....
Top

I hope she gets a good role soon. I really love her in "Mop Girl", I think this role fitted her quite well. Sadly "Lady" was just to boring for me and so not worth my time...I hope her next dorama will be better, because I really like to see more of her.

I liked her in Buzzer Beat, too. She's a very good physical comic actress, ala Lucille Ball and Tea Leone. In a dramatic role, she doesn't do that much for me, aside from always being nice to look at.
Top

What the heck is Breo?

I have a sudden inexplicable need to buy some. Thanks for the pics

I hope she will have a new drama this summer....
Top

where are the fans of this hottest LADY in Japan right now?

I know back then (since PGSM) that she's going to make it big...so proud of her...

waiting for the subs of Paradise Kiss!

love all the pictures here. thanks for sharing them

Her birthday is coming up! August 22!

^Thanks for all those lovely commercials of Keiko. I really can't wait to see more movies and dramas from her. I Recently saw Matataki. A rather somber movie but was still good, especially Keiko's acting.

is it legit?
Top

Doesn't look legit to me. It's an ordinary page with a friends list. Most celebrities usually get pages where you can't add them as friends, but instead can only "like" them. What I also find it suspicious is that page has another "Keiko Kitagawa" page on its friends list that is nearly identical. I could be wrong, but I wouldn't believe it unless she confirms it on her official webpage.
Top

^Thanks for all those lovely commercials of Keiko. I really can't wait to see more movies and dramas from her. I Recently saw Matataki. A rather somber movie but was still good, especially Keiko's acting.

can you please share the link of Matataki with English subs? Thanks in advance!

cute_angel wrote:
can you please share the link of Matataki with English subs? Thanks in advance!

Sometimes it's linked by its English title, Piecing Me Back Together. But I do have a few links to it.

^thank you so much!

^ Your welcome. Thanks for keeping this thread updated.

I hope someone will sub Paradise Kiss live action movie!

Recently saw the tv movie Kono Sekai no Katasumi ni. Keiko plays the part of a simple-minded housewife to a Japanese military officer. The movie is set in World War II. It's a pretty good movie and I recommend checking it out.

Yesterday I watched Keiko-chan in the movie Handsome Suit, which she was quite cute in. Also in the movie was Tanihara Shosuke whom she starred with in Mop Girl, and Tsukaji Muga who was with Keiko in Mamiya Brothers. Handsome Suit was a little cheesy and Keiko's role was kinda dissapointing. Despite being the female lead, she got less screentime than she did in Mamiya Brothers. However, the movie was great. It was hilarious and it had a good story. A solid 8.5/10

Snapshots from Keiko's recent movie, Paradise Kiss. Overall a good movie. I give it 8/10.

The previous pic is from a clip where they're showing one of Keiko's actual commercials with Palitte. The next two pics contain possible spoilers.

as always...Kei-cha is always cute!
Top

Just finished Paradise Kiss Utterly charming film and loved both leads. First time to see Mukai in a modern film. He is really magnetic. got something extra besides looks and he can act. Keiko really good. so happy to find this film thanks to yanie.
Top

Peggy wrote:Just finished Paradise Kiss Utterly charming film and loved both leads. First time to see Mukai in a modern film. He is really magnetic. got something extra besides looks and he can act. Keiko really good. so happy to find this film thanks to yanie.

I too watched "Paradise Kiss" two nights ago and totally loved it. I did not expect for this movie to keep me interested the whole time. I love both of leads anyway but in this movie and together, they were something different. And as I read, they have changed the ending from original manga and thank god, they did it. Kitagawa Keiko was very good and very pretty. As for Osamu Mukai, let's just say he never fails to catch my eyes and my whole attention whenever he appears on my screen.